Four years ago with my ties to XRX freshly cut in October, I was new to freelancing at the time and looking for steady work. Through various phone calls and emails, I scheduled some job interviews and possible meeting during “VOGUE Knitting LIVE!” in 2012 at New York City. As I previously wrote in a past post, I met with many friends in the fiber field and enjoyed walking around the many vendors represented. I even managed to convince BFF to break my “Cold Sheep” promise with a couple of yarn purchases. One of the pals I ran into was double-knitter extraordinaire Alasdair Post-Quinn (aka FallingBlox on Ravelry). His “52 Pickup” scarf never ceases to astound me. 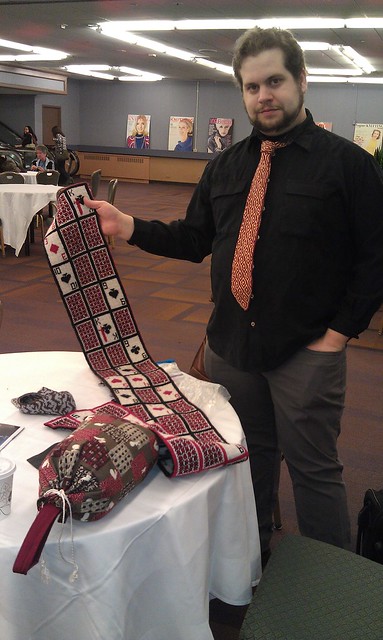 Another wonderful person I saw was news reporter Pam McKenzie of In Stitches. If you want to know what is happening on the East Coast, Pam’s the one with the latest dish. During all these events, I had chatted with Melinda of Tess’ Designer Yarns about knitting up samples for her booth. Cue 4 years later… After a flurry of phone calls this spring, I received the yarn and knitted these bunnies for Maryland Sheep and Wool 2016.

These little guys are knitted out of her Merino Angora blend yarn. Aren’t they adorable? Details of this project are in my Ravelry notebook. =:8

Spread the loveOkay, I have decided to take a break on documenting the past 2 months and throw something in the present. Tonight while searching for patterns, I noticed a knitblog which was listed in the Asian Knitters Ring. Being Filipino myself, curiosity piqued and I had to check it out and join. After submitting…

Spread the loveThough I have been in Blacksburg since Halloween 2009, not until I met the folks at Main-Lee Art Gallery did the phrase “First Friday” ever reach my ears. The words reference an open house occurring once a month for art galleries across major cities in the United States. I was excited to participate…

Spread the loveTo those folks who have not figured it out yet, I have many interests that run the gamut in sports, hobbies, technology, food, and drink. In the last six months I have been more determined to have no regrets because I want to try all that I can even if doing so causes…