There is a poem that I was required to know for my second year of French class. To this day I still can speak its haunting first sentences in both English and French:

“It rains in my heart like it rains in the city. What is this pain that has penetrated my heart?”

During STITCHES West at Santa Clara, I received a frantic phone call about thirty minutes before we were to close the Market on Saturday night. Getting ready for the Student Banquet was on my mind, and I was looking forward to showing off the Shore Set skirt that I had made from Knitter’s Magazine’s 2007 Spring Issue. So I was not prepared for what my buddy V said: “Get somewhere private NOW!!!” And when I assured him that I was somewhere that I could not be overheard, his next words were heavy. “Sweet P… He’s gone. I found him already dead. He was in the kitchen underneath one of the barstools.”

The shock hit me slowly. In my head I could not fathom the idea that my Sweet Pirate was gone. I had just left him a day or so ago in buddy V’s care. I recalled holding SP in my arms like I always did… Cooing as if he were an infant I let him jump on the top of my chest while I repeatedly said, “I keek! See Mommy, I KEEK!” And afterward I would snuggle his face to mine as he covered my cheeks, nose and eyes with bunny kisses. Now I wish I had recorded a video of him doing that very kicking act which we did often. Below is a photo of him lounging at my buddy V’s place while I was away on a business trip at STITCHES Midwest. 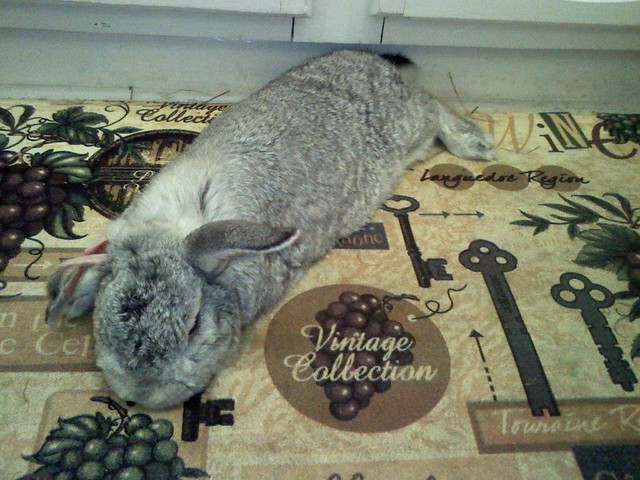 Though I do not have the kicking video, I do have one of him covering my face with kisses. One day I will share it, but for now I have a pair of funnier ones that never fails to make me laugh. It is when the Boys were given a paper towel roll with craisins in the middle and stuffed with hay at the ends. A couple of holes were punched out to make sure they could smell the sweetness of the fruit.

My heart is heavy as I have been trying to find a way to type out my emotions. The night SP died, my wonderful boss Benjamin Levisay excused me from having to work the rest of Saturday night so I could take care of a few items. I was able to notify Christina, from whom SP was adopted, and find out where one could get a necropsy. Both my buddy V and I wanted to know what happened — finding a beloved pet that was literally hopping hours before and was now dead is shattering to the soul. At the point when the veterinarian’s office asked, “How far away are you?” in order to determine how long it would take for me to bring SP, I had to quip: “Please excuse my biting humor because it is the only way I can deal with the shock, but I am in Santa Clara, California. Sweet Pea the Bunny is at my home.” The person on the phone actually laughed when she realized how her question sounded to me. I always feel that when one can only use humor to cope in a situation, one should use it as much as possible instead of being mean. 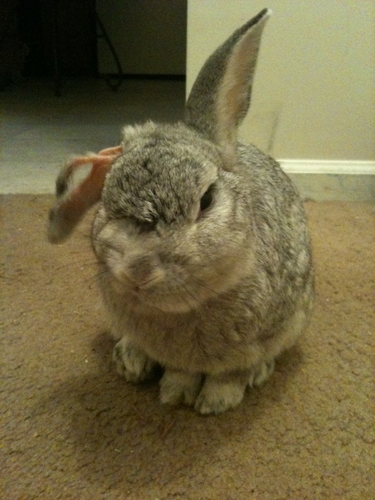 Sweet Pea always made me laugh even when he was being naughty. In the above photo, he was waiting for me to come out of the bathroom after my morning routine of cleaning up. He always could be found waiting outside my bedroom door, ready to greet me with little dances. He followed me around like a puppy. He loved begging while I was cooking or baking. He ate oranges and bananas like they were his last meal. He loved sitting on suitcases and pillows. And he fought like a demon whenever his nails needed to be trimmed or he had to get a bath. Though he was not around for long, he still touched the hearts of everybunny he met. Rest in peace, my Sweet Pirate. Your bunny kisses will forever be in my heart. =:8 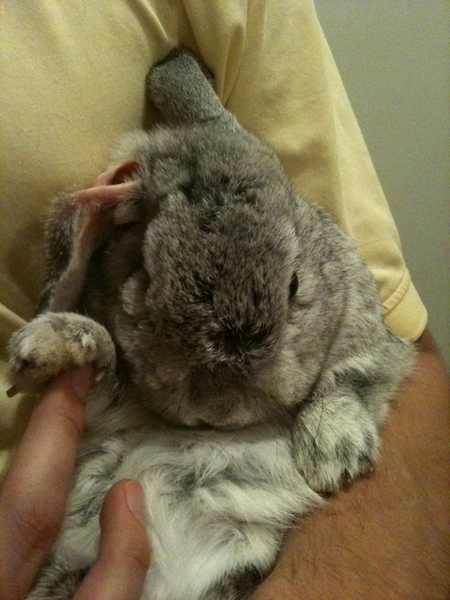 Spread the love Sorry for such a late post. Had an issue with the laptop tonight. 🙁 Many thanks for the compliments on my Holiday Meme. After last night’s outting with my former team from Fleet Bank, I decided to knock out some gift items, and I just finished one of them tonight. It is…

Spread the loveA reminder to me, need to show my support and spread the word on Sweet Binks Rabbit Rescue’s “I’m Dreaming of a White Bunny” adoption campaign. Lots of folks seem put off by albino rabbits. Little do people know is how intelligent and amazingly hilarious these white bunnies can be. I can readily…

Spread the loveWhile browsing through Facebook, I discovered one friend was tagged in a photo. The tag was for somebunny’s funeral. Blinking my eyes and shaking my head twice, I clicked into the photo set and matched familiar names with unfamiliar faces — faces that have aged within the past 2 decades. These folks were…