Before starting the History Unwound Retreat (which is scheduled for March 13-15, 2015 by the way), I have always been fascinated by period fashions. Whether it be 12th century Japanese robes, 20th century fisherman sweaters, and ancient Viking dress, I am intrigued by not only the “what” but also the “why” such items were worn. Researching on these fashions has given me an excuse to get hoppily lost in various books and websites.

Recently I came across an 8-inch stack of mint “Golden Hands” craft magazines that were being given away at my guild in Gloucester, VA. Because I work in the publishing and marketing sides of the fiber industry, I am always curious about how designs and ideas were portrayed. I found a treasure trove of designs and patterns for knitting, crocheting, tatting, bobbin lace, sewing, embroidery, and even macrame. My favorite find was the not-so-often articles aptly titled “Collector’s Piece” where older textiles are shown and briefly discussed. Issue “Part 65 Volume 5” shows a pair of gloves gifted to Queen Elizabeth the First on the left and a pair of elaborate mittens featured on the right. Both accessories are part of the Victoria and Albert Museum in the United Kingdom. 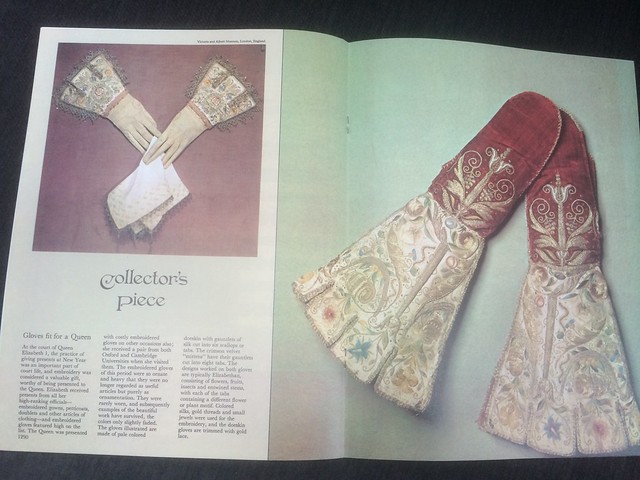 Are you as fascinated by fashion as I am? Which periods or eras make you swoon? =:8

Spread the loveAs of late I have been dipping my foot (well, okay more like diving in head first) into areas that I have not been in touch with for years. My taking up of throwing darts has been a nice challenge. I find myself improving each week in every league match, and concentrating on…

Spread the loveFound a very funny link in Cute Overload. The original site is HERE. If you think about it, making clothes for bunnies would be another great way to combine my 2 non-Richie loves of rabbits and yarn! Please consider me inspired to make one for each of my little ones… And on that…

Spread the loveOriginally, I wanted to name this post, “What’s in your Fridge?” Then I changed fridge to pantry. Realizing that some folks do not have a pantry, I finally settled on the current title. It is amazing how carefully chosen words can make the difference in understanding a writer’s thoughts. Anyway, the reason this…

Spread the loveAfter having some warm days filled with sunshine, Rhode Island has become cold and chilly. We even had snow flurries in the northern section of the state this morning! Luckily where I live and work it was just rain and wind, but the air still had that “snow is around the corner” feel….

Spread the loveWhen I signed up to write a guest post for Ruth, I thought I had selected a topic that was easy-peasy. After much debate and with current political issues screaming for attention, I became indecisive on which one of the major decisions I made in these past 2-1/2 years was the biggest risk….

Spread the loveI have been naughty this weekend by not posting and I apologize. I have excellent reasons for digressing from blogging and posting, the distractions are my KT2 Swap Pal package, WIPs, and bowling! To catch you all up, here is my Saturday Sky and what I had planned to write over the weekend….